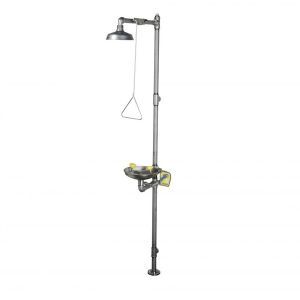 Eyewash Stations and Emergency Showers - Why are ANSI regulations better than others?

At Safety-Eyewash.co.uk, we’ve written at length on the subject of ANSI Z358.1 regulations - but those aren’t the only guidelines available when installing an eyewash unit or safety shower. In the following article, we’ll look at the many and varied pieces of guidance, and why we believe the American National Standards Institute (ANSI) directives are the best.

Why so many regulations?

Frustratingly, there is no single piece of British legislation that covers all aspects of emergency decontamination equipment, which means that it’s necessary to consult several different bodies of regulations in order to get an idea of your responsibilities.

All of the standards listed below are voluntary - they are not legally binding, but adherence to them is considered best practice. However, claiming you’re compliant when you’re not could land you on the wrong side of the law.

Of all the bodies of guidance available, the ANSI Z358.1 regulations are the most complete. The only problem is that they were originally drawn up for the American market; in an ideal world, we’d have a similarly comprehensive set of standards specifically for the UK.

We’ve already written an extensive guide to the ANSI regulations, but in a nutshell, they cover the way emergency equipment is manufactured, installed and used. They also issue guidance on testing, training and signposting.

The EN 15154 will eventually comprise five sections; at present, only parts one and two are complete, with parts three and four in the draft stage. Parts one and two cover plumbed-in safety showers in laboratories and plumbed-in eyewash stations, respectively.

Part one of the European Standard states that once activated, plumbed-in safety showers must:

Discharge water at a rate of 60 litres per minute, for at least 15 minutes
Contain 95% of the water flow within a 40 cm diameter

The water used must be potable and free from contaminants. The minimum recommended water temperature is 15°C.

The guidelines also state that manufacturers of safety showers should provide information on installation, operation and maintenance, and the correct manner and frequency of operational testing. The shower should also be marked with the identity of the manufacturer.

Part two of the standard covers safety eye wash units. According to the regulations, all eyewash units must:

Discharge water at a rate of six litres per minute, for at least 15 minutes, at a jet height of between 100mm and 300mm
Take less than one second to activate via a valve

The water quality and temperature, as well as the inclusion of manufacturer’s information, are the same as Part One of the regulations.

Seeing as EN 15154 is incomplete, some products defer to the German DIN 12899-3 directive to fill in the gaps.

This guidance stipulates the parameters for both plumbed-in and tank showers in manufacturing and warehouse environments, specifying three different classes and two distinct flow rates.

For plumbed-in safety showers, fluid should be distributed 700mm beneath the shower head.

In the case of tank showers, fluid distribution rates must be the same as Class Three safety showers, irrespective of flow rates.

Water must be of local drinking standards, and the DIN guidance refers to EN 15154.1's advice on water temperatures, which suggest water to be kept at a temperature between 15C and 37C

As you can see, the ANSI regulations are much more comprehensive than their EN and DIN counterparts. This is why we make sure our products are ANSI-compliant.

The regulations state that any workplace working with hazardous chemicals should have, at the very least, access to mains tap water or a minimum of one litre of sterile water stored in sealed containers for the purposes of eye irrigation. All first aid kits should also contain sterile eye pads.

However, much uncertainty surrounds the health and safety landscape as the UK heads toward a post-Brexit future, with enormous work to be done to ensure there are no grey areas over regulatory guidance.

In the future, there may well be uniform British standards that are as stringent as the American directives, but until then we’ll only ever stock products that comply with ANSI Z358.1.

We realise the technical nature of this article may be confusing, so if you’d like further guidance on any of our products and the safety standards they adhere to, please give us a call on 01275 390643 or drop us a line at sales@safety-eyewash.co.uk.